A decade ago, the hype over automation took off. Pioneering work from Carl Benedikt Frey and Michael A. Osborne in late 2013 predicted that 47 percent of U.S. jobs could be lost due to automation. The study was cited widely, appearing in The Washington Post, The Economist, Ars Technica, and The Verge, among other outlets.

By the middle of the 2010s, the acolytes for automation grew. Self driving cars, which seemed impossible a decade before, were now hitting the streets and were poised to revolutionize the roads. In 2015, Chris Urmson, the former leader of Google’s self-driving car project, thought his son wouldn’t need a driver’s license because driverless cars would be so plentiful by 2020. Elon Musk was even more bullish, predicting that there’d be 1 million robot taxis by 2020. Instead we got COVID.

With some perspective, the AI hype cycle seems to have crested.

It’s taken nearly a decade of research, but now on the precipe of 2022, the theoretics and empirics around automation are much better understood. First and foremost, automation won’t replace jobs. Rather, they augment tasks, and because jobs are composed of multiples of tasks, there could be a range of varying impact depending on the automation technique. As Daron Acemoglu and Pascual Restrepo explain in “Automation and New Tasks: How Technology Displaces and Reinstates Labor,” automation might have a displacement effect, a reinstatement effect, or some combination of the both. A displacement effect is the impact that automation has when capital takes over tasks previously performed by labor while a reinstatement effect references the the redeployment of labor into a broader range of tasks, which has the effect of changing the task content of production in favor of labor.

The implications of these countervailing forces are important, as economists David Autor and Anna Salomons explain, because it means that the “wagebill—that is, the product of hours of work and wages per hour—rises less rapidly than does value-added.” In other words, we might not expect replacement of workers by automation, but rather that their share of value added does down over time.

More importantly, automation techniques are being unevenly adopted across industries. The classic example of robots working in manufacturing underscores this point. From 2004 to 2013, there was virtually no change in the level of robotization in non-metallic mineral products like ceramic and glass. But, the automotive industry, which was already heavily reliant on robots, experienced a spectacular rise in the robot density between 2004 and 2013.

Understanding the impact of robots and other automation technologies will require analysis of every industry. In particular, it’s usually larger firms that can afford the costs of automating their processes. As the authors of a report on Europe’s superstar manufacturers explain,

A firm will invest in productivity-enhancing technology, such as industrial robots when the expected gains from a reduction in marginal costs are greater than the fixed costs of adoption. Since large firms with higher output and sales tend to benefit more, they might be more willing to incur the fixed costs of investment.

Research into nursing homes, for example, found that automation technologies decreased the staffing levels by 5.8 percent in high-end nursing homes. In comparison, low-end homes saw an increase in staffing by 7.6 percent. As the authors of the study pointed out, “these findings suggest that the impact of automation technology on staffing decisions depends crucially on a facility’s strategic position in the local marketplace.”

Studies of one specific Dutch company undergoing automation found a range of complex impacts. Overall, workers were more likely to separate from the firm and see a decrease in days worked, leading to lower wage incomes, but the overall wage rate didn’t change. These lost wage earnings were only partially offset by various benefits systems, but the lost earnings were disproportionately borne by older workers and workers with longer firm tenure.

Meanwhile, a large study of Spanish manufacturing firms found that more productive firms were more likely to adopt robots, leading to substantial output gains over time. While these frontier firms increased their worker numbers, at the same time, the report found “substantial job losses in firms that do not adopt robots, and a productivity-enhancing reallocation of labor across firms, away from non-adopters, and toward adopters.”

Firms struggle to keep up because it is costly to transition to new production processes that use robotics or insights derived from advanced data analytics. These switchover costs can sometimes be insurmountable. Survey after survey finds that technology upgrade projects offer businesses little or no advantage. Surveying a wide range of these reports, IBM found that 25 percent of technology projects fail outright, while another 20 to 25 percent don’t show any return on investment, with the final 50 percent needing massive reworking before being finished.

We need autopsies and I can see this taking three forms.

The first kind of autopsy would take the form of a lookback on some hearings. While I have not dug deep, there were a number of hearings throughout 1982 and 1983 on robotics and the workforce. Of particular interest were the hearings in the House of Representatives on May 17, 1983 and the following day focused on the “Impact of robots and computers on the work force of the 1980’s.”

Second, a lot of the job loss predictions from the early 2010s need to be reassessed. A couple of years back while at AAF, I did just this, but I had limited space and resources. I would begin with Frey and Osborne and then do a full assessment of Forester and the others. 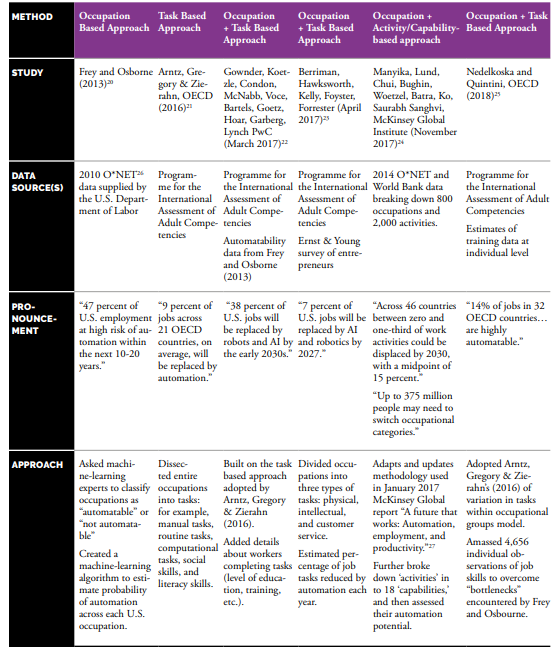 Finally, and it would be more comprehensive, but I would look into the predictions made by the BLS' Occupational Outlook Handbook. Every couple of years, or it might be every decade, the BLS projects job growth, which becomes a central feature of the OOH. I can only imagine that they have gotten some of these predictions wrong, but how so? What are the biases?

I also wrote about this subject here before: Tracing the impact of automation on workers and firms.