Are Millennials going to end up worse than their parents?

In one way, they are already doing better. Recent Census data on income suggests that Millennials aren’t doing worse than their parents. Table P-10 located here lays out median/mean income for those 25 to 34 going back to 1974, adjusted to constant 2019 dollars. Quite clearly those aged 25-34 in 2019 are doing better than any group throughout the dataset with a median income of \$39,213. To be fair, there is a peak around 1999 as well. Still, mean income is also at historic highs for this group at \$48,513 in 2019. In other words, the 25 to 34 age cohort isn’t doing all that bad.

Now admittedly, 2020 data has yet to be filed, so there could have been a drop.

Instead of income, the conversation tends to focus on wealth. A tweet from Dan Price exemplifies this version of the argument. 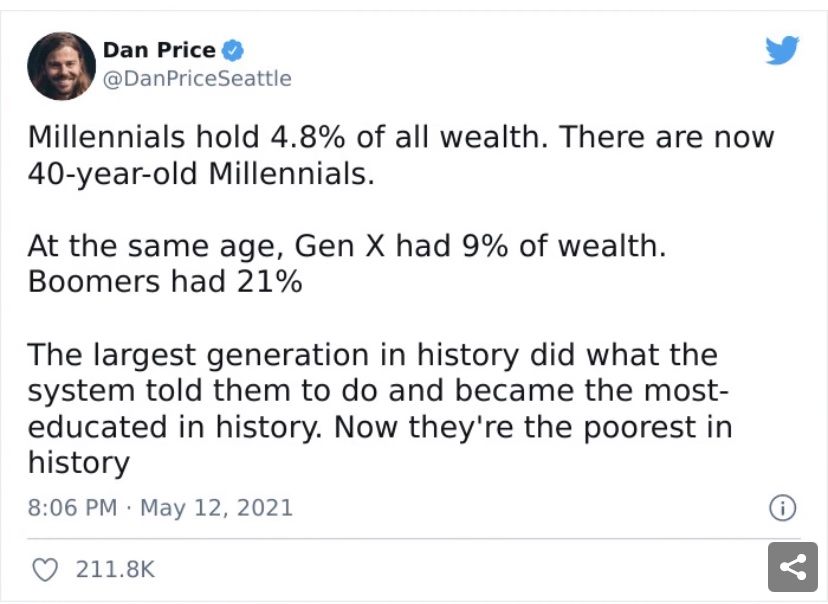 The best data on wealth broken out by age range comes from the Fed. The table you end up seeing is something like this:

It is clear from the data that Millennials aren’t putting up the numbers like other generations. There are a lot of reports that underscore this generational divide in wealth. Here is a GAO Report on the topic and an NBER working paper. 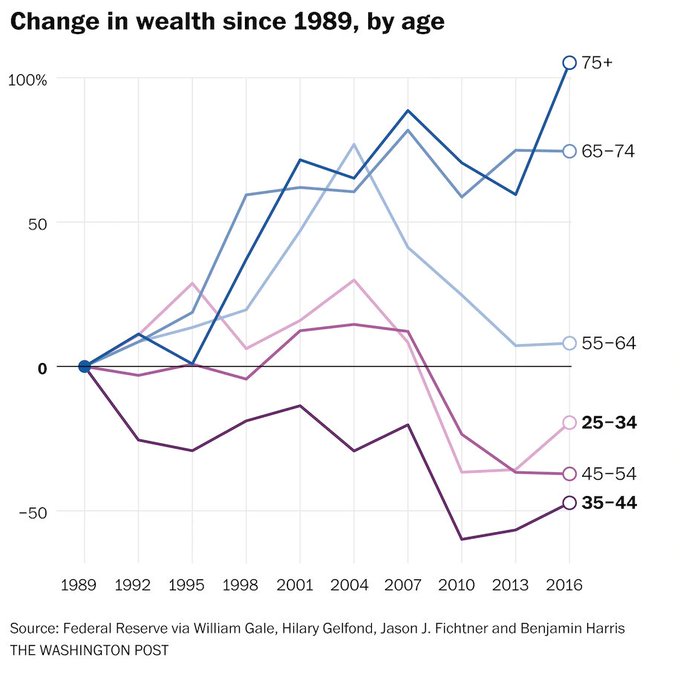 I think this view highlights the problem better because of the nature of wealth. Just as a reminder, wealth is a claim on the market value of some asset. Wealth, then, is the summation of the expected net present value of cash flows generated from direction over those assets. It is not liquid or even money for that matter. Wealth is value, denominated in a money-price.

Wealth is accumulated by buying assets over time, which in turn, is a function of the ability for a person to buy into those assets at any given point in time. Moreover, the value of those assets changes over time.

Maybe I am being too naive, but my mode of thinking is dominated by the simple two-period overlapping generations model or OLG. In the first period agents work and invest, and in the second period, they consume what they saved. Let’s tweak the second period every so slightly to make it be wealth, which makes a lot of sense. Wealth represents an accumulated store of lifetime investments in assets.

Extending OLG just a bit more, we should also consider the investment that Millennials make in themselves to generate a period onto itself. Student debt is a problem because it delays investments into wealth. So we have a three-period model. In the first period, an agent educates, then in the second period, they earn income, and in the last period they consume wealth.

On the face of it then, we should expect the path of wealth accumulation to be delayed for Millennials. They are delaying buying assets at a younger age to do so at a slightly older one. This is the classic consumption smoothing insight. But Millennials will probably work longer lives, extending out this entire process.

Let’s say, for a moment, that we want Millennials and Boomers to have about the same outcomes in the end. To be fair, I’m not sure this should be a goal, but let’s hold out on that for a moment. Much like the oaks in Central Park, the wealth of Baby Boomers is in its prime. They are the generation with the biggest share of wealth, largely from real estate, securities and equities, and pension entitlements.

First pension entitlements. These entitlements are really just liabilities and we should expect this part of their wealth to be large. The current value for an expected payout is a summation of what Boomers will get over the next 30 to 40 years. Comparing Boomers to the Silent generation puts this in sharp contrast. As grisly as it is to say, the Silent generation doesn’t have much pension wealth because the payouts will end when the generation passes. I don’t know much about pension liabilities, but I expect it was probably cheaper to buy into these assets. I need to dig deeper on this.

Boomers clearly benefited from a general rise in the price of stocks over their lifetime. It could be that the rise in wealth due to the overall rise in the value of securities and equities might not be recreated during our lifetimes. Still, I am not certain about this claim. Stock markets are stores of value. Companies are searching out that value which is getting harder to find. The value of a capitalized dollar might be going up.

The most concerning part of the Millennial wealth gap to me is the ability to buy into wealth, specifically real estate. Home prices have shot up in the last 30 years and it is more difficult to buy into this form of wealth today as compared to the 1970s. These lines of thought are by no means fully fleshed out, but it seems to me that the important part of the wealth gap story is missing.