This morning my friends Angel and Joseph asked for my help in arbitrating a dispute over a part of Michael Lind’s new book. The passage in question suggests that if the iPhone were  completely manufactured in the United States, it would only cost an additional $100: 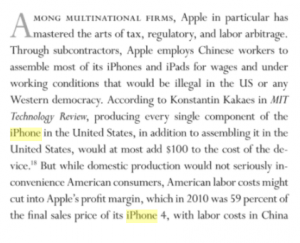 The original MIT Technology Review article on which the cite is taken also makes a similar kind of assumption. Chinese wages are lower and so they can make stuff much cheaper. End of story.

I tend to think there’s more.

Last year, the New York Times ran an article I wished more people read, titled, “A Tiny Screw Shows Why iPhones Won’t Be ‘Assembled in U.S.A.'” The thrust of the piece was simple, but powerful if you understand how important supply chains are. Near the beginning, the authors laid out the problems Apple was having with a previous version of the Mac Pro, and in doing so, diagnosed a central issue with U.S. manufacturing:

But when Apple began making the $3,000 computer in Austin, Tex., it struggled to find enough screws, according to three people who worked on the project and spoke on the condition of anonymity because of confidentiality agreements.

In China, Apple relied on factories that can produce vast quantities of custom screws on short notice. In Texas, where they say everything is bigger, it turned out the screw suppliers were not.

Policymaker especially have yet to wake up to the ailments of manufacturing in the United States. Chinese manufacturing supply chains have depth in the way that Silicon Valley has a depth of computer engineering talent.

Apple insiders recognized the depth of Chinese supply chains as far back as 2012:

Apple’s executives believe the vast scale of overseas factories as well as the flexibility, diligence and industrial skills of foreign workers have so outpaced their American counterparts that “Made in the U.S.A.” is no longer a viable option for most Apple products.

There are other examples. Research in solar photovoltaic manufacturing suggests that, “The historical price advantage of a China-based factory relative to a U.S.-based factory is not driven by country-specific advantages [like low labor cost], but instead by scale and supply-chain development.” If policy makers are actually serious about bringing manufacturing back to the U.S. they should be talking about what it really requires, deep supply chains.